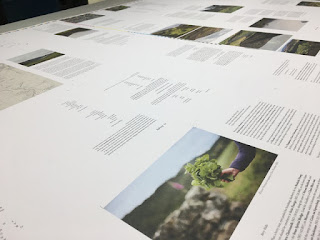 Gathering is an innovative mapping of the Highland landscape in poems, essays, photographs, and maps, conceived by Scottish artist and poet Alec Finlay. The work guides the reader to modest and forgotten places in this complex region.

Finlay worked from Adam Watson’s published collection of names, one of the most signiﬁcant modern contributions to Scottish folk-culture consisting of over 7,000 local place-names, covering every ruined farm, shieling, hill, glen, spring, burn, and wood in the region. Over a period of years, Finlay expanded Watson’s catalogue into a generous ‘ecopoetic’ and ‘place-aware’ account of the Cairngorms, accompanied by photographs showing the hills in all their seasonal variety. Essays guide the reader to names that reveal the haunts of wolves and wildcats, and cast a vivid impression of the great pinewoods that once grew there, and may again. 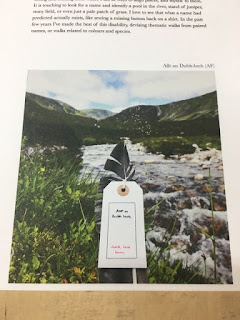 With these local names as a guide one becomes aware of a wonderful range of locations that have been overlooked – forgotten shielings (summer huts), and springs, or lost forests, as well as modest patches of berries, and places that have names because they were once useful to peasant farmers. I term this approach place-awareness, and I hope it will give readers a new appreciation of the region.’ - Alec Finlay

A multitude of perspectives – of the walker, hiker, climber, stalker, gun, forager, birdwatcher, and geologist – are gathered together, weaving varied perceptions of the landscape and revealing the ways in which these reﬂect human uses and human desires. By combining poetics, ecology, and folk-cartography, Finlay’s ‘place-aware’ philosophy offers readers and visitors alike a remarkable new insight into this evocative and vulnerable landscape. 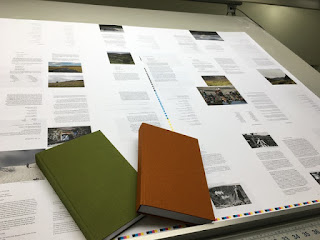 Gathering was created for The Fife Arms hotel, located in Braemar within the heart of the Cairngorms, which will reopen in December 2018 after a complete restoration.  Finlay has contributed to the names of the hotel’s 46 rooms and suites, with each room a homage to a place, person, event or activity with links to Braemar. Finlay’s artwork will feature throughout the hotel, and his poems will be carved into the wooden headboards in some of the guestrooms. 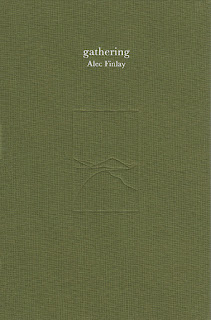 Gathering was commissioned by Hauser & Wirth, for the Fife Arms Hotel, Braemar; the project was launched in 2015 and will conclude in 2018.
Email ThisBlogThis!Share to TwitterShare to FacebookShare to Pinterest 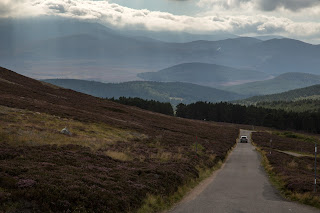 Place-names provide the methodology for this eco-poetic mapping of Am Monadh Ruadh, the russet or red hills, now commonly known as The Cairngorms, Upper Déeside, The White Mounth, and The White Mounth.

The place-names are from Adam Watson’s collections: The Place Names of Upper Deeside (1984) compiled with Elizabeth Allan; the follow-up, Place-names in Much of North-east Scotland (2013); and a recent collaboration with Ian Murray, Place Name Discoveries on Upper Deeside and the far Highlands (2015). That we have so many names available to us for this fascinating region, where Gaelic, Scots, Pictish and English inter-mingle, is largely down to the diligence of Adam, his collaborators, and informants.

Adam’s name collections make a significant contribution to Scottish folk-culture. They total over 7,000 place-names covering almost every field, ruined croft, shieling, hill, corrie, burn, and wood, gathered from 260 local people. The names are commonsense and, occasionally, mytho-poetic; they convey ways of seeing and preferred formulations. In adding a sub-stratum to the Ordnance Survey they offer a radical class based ‘eco-poetic’ alternative to Landranger and Explorer maps. This perspective on the landscape has a contribution to make in terms of current land use debates – the movement initiated by Frank Fraser Darling, maintained by Adam Watson and Dick Balharry, and re-ignited by Andy Whightman – they have always combined a social and ecological perspective. They also offer a new path for eco-poetics, and add to what I like to call the hutopian movement, and place-aware walking – a term I coined for this project. In other words, they belong within that renewal of interest in the wild, innovative mapping, foraging, marginal gardening, and the blending of commons and crafting. The blogs will touch on these, along with more traditional practices, like stalking, hiking and climbing – always by way of names.

Compare the level of coverage these place-names provide with the paucity of today’s automobile-centric maps, and Google-Earth, which impoverish place-names and represents the non-urban landscape as a beige desert or wood of a green no leaf has borne. 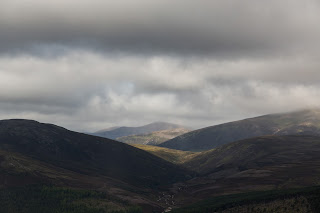 A name is a place and its absence. How rare it is to be present at the moment a name is coined? There are place-names that record a fleeting moment – the presence of a bull in a field, a landslide, or the death of someone out on the hill – and there are names that seem to refer to an ever-present – the mountain upon which a snow wreath rests deep into summer.

If we choose to see the world through names and their meanings then a vast field of reference awaits us – a world characterized by flux. Words change when they become names; names change when speech is written down; speech changes with the incursion of new language communities and flattening effects of popular culture. 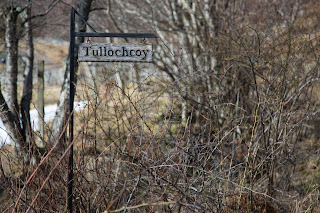 The old Gaelic names of Deeside were liable to be Frenchified, Scottified, and Latinised, long before they were Anglified and mapped by the Ordnance Survey. We have to listen in to the hidden sounds that reverberate within them if we wish to understand, or guess at, their meaning. Today’s English-speaking hikers like to salt their speech with corries, bens and bealachs. John Murray, author of the touchstone Reading the Gaelic Landscape, lists some of the Gaelic toponyms absorbed into English and Scots: brae (bràigh), cairn (càrn), craig (creag), glen (glean) and knock (cnoc). Not everyone will recognise other borrowings: gob, trousers, smidgen, bother, teaming, smashing, and slogan. The study of names is a matter of linguistic archaeology, but we should never forget that naming is a creative and, sometimes, unconscious act. It is less interesting to reduce names to the words they once were, than to attempt to follow the passage through which they have been altered and, sometimes, transformed. Names are about our belongingness: how we belong changes. Names are a guide to human time, human space, stewardship, and loss. 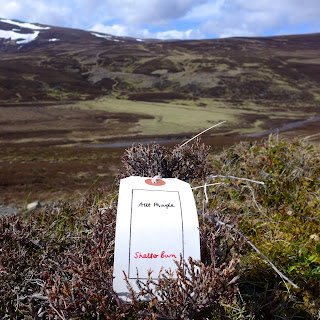 When I was invited to work with Hauser & Wirth – the generous collaborative teams they assemble ensures it is with, not for – I decided that place-names would be my guide to the region. In particular, I wanted to work with the remarkable catalogues of names collected by Dr. Adam Watson.

It was in one of Adam’s books that I first read the name of a burn, Allt Phouple, named for a ruined sheiling – a summer pasture – in the upper Gairn. Adam’s translation is ‘the burn of the booth’ – like the búðir the Icelanders used for their temporary huts of stone and skin coverings that were set up around the Alþing every summer, at Þingvellir. I have given this translation:

I was lucky enough to be guided out to the ruins by local guide Ian Murray, who has written three books on the region, drawing on the folk memory of some of the same informants as Adam – folk such as Rob Bain of Ardoch. What Ian and I made of the name Allt Phouple, and its meaning, will be the subject of a future post. One of the name labels that I used in my initial field research is included above.

We are no longer summer-walkers, but our minds remain tailored to identify marks in the landscape. Standing stones and significant skylines are evidence of a belief system – what Hanna Tuulikki calls ‘memnonic topography’ – that adapts the landscape into a seasonal clock, essential for managing the agricultural calendar and making the best of what’s available.

Adam’s survey of local names defines a poetics – or eco-poetics – of the bioregion of the Dee, tracing flora, fauna, lost forests, and deer-tracks, making common cause with Walter Benjamin’s thought:

‘Isn’t every region governed by a unique confluence of plants and animals, and isn’t every local name a cipher behind which flora and fauna meet for the first and last time.’

A shift of the gaze can change what we perceive and, in a similar way, knowing the meaning of a name can bring a shock of recognition. Names travel us through time, unraveling their meanings, revealing the ciphers: this was once the lair of the wolf, here is where the stags gather: 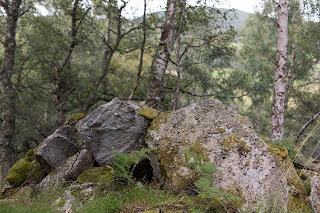 These blog posts bring together two projects. The eco-poetic mapping will become artworks for the Fife Arms, Braemar, along with a publication that including maps, photography, poems, and prose, some of which you can read here. As ever, I am working with a team of people – some local, others from farther afield – identifying place-aware walks and other ways to appreciate the complexity of the landscape of Upper Deeside.

Collaborators include Hannah Devereux, the primary photographer on the project, who worked on the Taigh memorial at Royal Botanic Garden Edinburgh, and Gill Russell, who worked with me on the colour walks in Some Colour Trends, and is creating watershed maps and working with me on conspectus. Place-names guide our attempt to represent the ways that locals and visitors experience the Monadh Ruadh – stalking, climbing, walking, ecology, history, deer, and pinewoods, each perspective is a different vision and our interest lies in allowing these to speak to one another, sometimes agreeing, sometimes arguing.

The field research is extended by a parallel artist residency at the Department of Anthropology, University of Aberdeen, where I will share ideas with Jo Vergunst, Tim Ingold, Alan Macpherson, and others; as well as working with the poet David Wheatley, who teaches creative writing in the School of Language and Literature. Having got to know these peers outside of their offices through shared conversations at Deveron Arts I will do my best to erase departmental markers.

Jo and I share an interest in new walking practices, such as my own place-aware walks, viewing, and conspectus, which are partly inspired, or necessitated, by the limits illness imposes on my walking. And we will also explore Caledonian pinewood regeneration, looking at sites on Invercauld and Mar Lodge Estates. 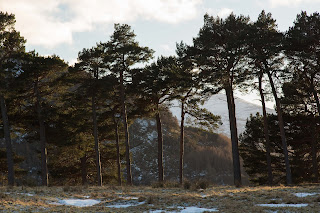 Some of these ideas, in particular those connected with walking and viewing, are also being explored in a new journey project with Ken Cockburn, The Perthshire Tour: follies, views & wild gardens. Other previous journey and mapping projects are listed in the blog roll.

In the posts and publication the English translations of the names are my own, based on Adam Watson’s, and with reference to other sources and contemporary experts – referenced in the bibliographies that feature at the end of the posts. Adam’s translations are available as a definitive record and, of course, the interpretations I have given will never supplant his greater scholarship and working knowledge of local Gaelic. My English versions of the names are ‘poems’; for example, conventional English translations from Gaelic would give ‘burn of the X’ or ‘hill of Y’ and, although these are accurate, I chose to work as a translator of poetry would, bringing the expression over into English, giving a sense of the broader meanings, using words appropriate to a local toponymic feature, especially where I was able to view the site. 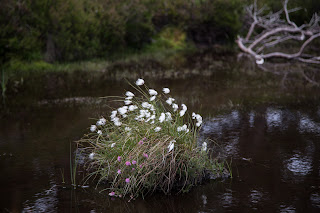 The artist residency at University of Aberdeen is funded by The Leverhulme Trust; the project was launched in July 2016 and will conclude May 2017.
Email ThisBlogThis!Share to TwitterShare to FacebookShare to Pinterest
Home
Subscribe to: Posts (Atom)