An Da Shealladh, The Two Sights 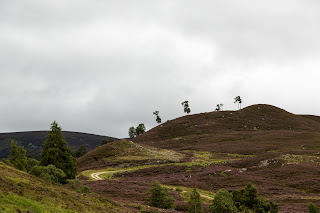 FEY
under the hill they go : FAIRY
A DISTURBANCE IN THE ATMOSPHERE : SHEE
A HALL IN THE HILL : SìTHEAN

‘It was a quaint and beautiful superstition that peopled such verdurous hillocks or “tomans” with shadowy forms, like diminutive mortals, clad in green silk, or in russet grey, whose unearthly music came faintly sounding from underneath the sod. The mounds rose so conspicuously from the ground, and, whether in summer heat or winter frost, wore ever an aspect so smooth and green, where all around was rough with dark moss-hags and sombre moor, that they seemed to have been raised by no natural power, but to be in very truth the work of elfin hands, designed at once to mark and guard the entrance to the fairy world below. The hapless wight who, lured by their soft verdure, stretched himself to sleep on their slopes, sank gently into their depths, and after seven years servitude in fairyland awoke again on the self-same spot.’ 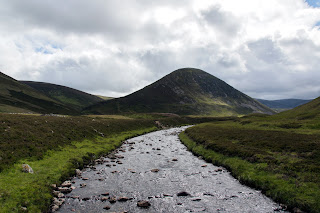 On the way into Glen Ey, beyond the lower bridge, in Coire an t-Sìdhein, sìth corrie, there‘s a little-and-large hillock, Cnoc Chadail, which Alexander translates knoll of the sleep. A perfect example of a fairy knowe, it anticipates Creag an Fhiuthais, crag of the spectre, looming further up the glen, whose bogle was banished by a priest fixing a crucifix on the hilltop. As I discussed in an earlier blog, one interpretation of the name Ey is crying, which I have translated as the eerie lament, Keening Burn, pushing a particular interpretation that must remain speculative.

CRY FOR THE EYE : KEEN

There are shee-related names – shee, from sìthean, fairy – scattered throughout the Highlands, making a Sìthscape of alt-reality. Creatures of the wild, the sìth were folk of silence, moving noiselessly, ‘like birds or hunted deer’, seen – or conjured – at dusk, in storms, in the effects of light, teine sìth, sìth-lustre, and eddies of wind translated into strange music. Italo Calvino says that they lived ‘beneath the earth, in little mounds perforated by tunnels and fissures’. In the old tales any grassy knowe is liable to be a portal accessing the otherworld. To The Antiquarians fairies were chthonic memories of the ancestral dead, a race of diminutive Pictish forebears who built mysterious burial mounds. William Forsyth describes a sìth hill at the entrance to Glenmore, dividing sight in two:


‘…a little south of the Green loch, there is a conical hill, called Sithean Dubh Dà-Choimhead, the black Sithean of the two outlooks. The name is descriptive. It appeals to memory and imagination, and brings the scene before us in a picture. Standing on this height, you can look on the one side to the great glen opening out before you, with its far-stretching fir woods, mixed with birch and juniper, its well-watered glades and sheltered nooks where the deer love to feed, and its grand back-ground of snowy corries and rugged cliffs, and lofty mountains whose tops seem lost in the clouds. On the other side you look as through a cleft in the sky, across the moors to the strath of the Nethy, with its green fields and smiling homesteads, and the many signs of life and civilization. This is the double outlook, which has charmed many an eye in the course of the ages.’ 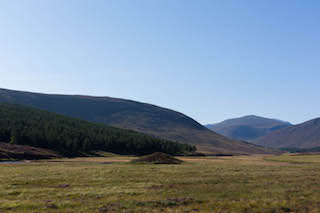 Fairy knowes reach through the axis of reality. John MacInnes describes them as a metaphor for the imagination: ‘from this shadowy realm comes the creative power of mankind’. When composing a poet was said to be anns a’ chnoc, in the fairy mound. Angela Bourke thinks these accumulated beliefs represent a ‘database’ of folk knowledge from which a pre-modern community could retrieve information about cultural lore. Gaels embraced the irrational, or enchanted, which may explain why witch trials were less severe in the Gàidhealtachd – not to forget the bonfire mound of Tom Buitsich, witches knowe, by Creag nam Ban. Superstition and prophecy were weird in the original sense of the fates. The gift of an da shealladh was held in esteem, but those visited with trances were understood to be enduring an affliction. Tales of changelings, fairy kidnapping, altered sleep states, forgetfulness, and half-death mark the ebb of these beliefs.

Sit on Cnoc Chadail – a natural drumlin with the look of a tumulus – and review the lore of the fairy. A young man was bewitched as he dozed here. Some time passed, as they say, and, in Jean Bain’s telling, ‘he heard the most lovely music, and he stoppit an listened, an then he went awa ower an gaed inti this hillock where the faeries wis. In some versions he sleeps for the archetypal spell of seven years, like Tam Lin; in others he dances before the shee release him. John Grant’s psychedelic version names the shepherd, M'Roy, is. He dwams on a patch of muirburn and begins to trip, staring:

‘at the immense quantities of little black holes, the grotesque bends, the mathematical figures, the twists, the twirls, the oddities and whirlimagigs of these remnants of the burning. All of a blow – he saw with a start – the black holes became an ocean of little eyes looking hard at him; of a blow the ocean of little eyes began to wink very cunningly indeed; of a blow the grotesque bends formed themselves into little legs and feet, arms and hands; of a blow the diagrams, triangles, parallelograms, trapeziums, &c., shaped themselves into sprawling little bodies; and of a blow the twists, the twirls, the oddities and whirlimagigs were nothing more or less than a dance, a boiling, a riot, a tumbling, wheeling, rolling, rumbling fermentation of little folkies – the queerest sight that mortal ever saw. With great presence of mind … our hero named, seized the pebble, and, rousing himself from the fascination of the view, threw it over the spot, exclaiming, "Let all that is within be mine, in God's name."

Presto a beautiful woman stood before him, with no more clothing to spare than when her mother bare her. But the batchelor bold … threw his plaid over her, and, modestly turning away, waited until she had arrayed herself as well as might be. In fine, he led her home with him, and in finer he led her to the altar also and gave up bachelorship.’ 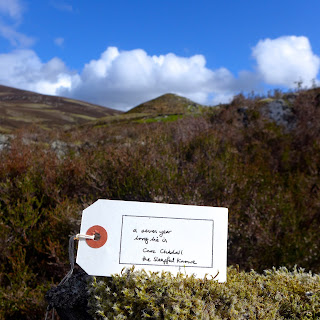 In Bain’s story he gets safely back from Cnoc Chadail, but his bairns are all grown-up. Davie Lamont gives another version starring a crofter, Ruaridh, who was fu’, and on his way home from collecting his week’s oatmeal.

‘The next day – no sign of Ruaridh but here was the boll of meal at the foot of the Cnoc. Searches were carried out but to no avail – no trace of Ruaridh or his bottle. At the next full moon, Ruaridh reappeared, large as life and none worse for his disappearance, swearing it was the Fairies who had stolen him and his whisky. What a time he had – drinking whisky with the wee folk, singing and dancing – being waited on hand and foot and chatting up the bonny quines among them. He was loath to return but they insisted he had to go or become one of them forever. He had taken the precaution of sticking his plaid brooch into the doorsill on entering the Cnoc so was guaranteed safe exit when desired. When he thought of the kyardin he would get from Muckle Aggie, his fearsome spouse, he tried to get but No! He was out and there was no way back.’ 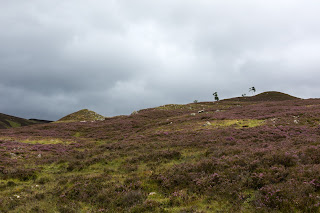 Brooches and combs recur as talisman; witches sometimes laid a brooch among healing herbs to effect a charm – perhaps related to the comb motif on Pictish stones? Nicolaisen says place-names tend to gather stories because they ‘encapsulate a past’ – a mound must have fairies within, a howe acquires a goblin, a story is born. Brenda Macrow records another fairy tale at Sìdhean, shee knowe, by Loch Callater. One Christmas two men were passing when they heard beautiful music.

‘One of them, seeing a cave, went in to join the Wee Folk at their festivities – and the hillock closed upon him. His friend, being taken to task for his disappearance, visited the hillock many times, but never found it open until the following Christmas-time, when, upon entering, he found his vanished companion standing in a trance, watching the Faeries at their revels. With a great effort, he managed to pull him out – and nothing would convince the man that he had been longer than a few minutes in the hillock, until he went home and saw by the changes in his family that he had been away a whole year.’ 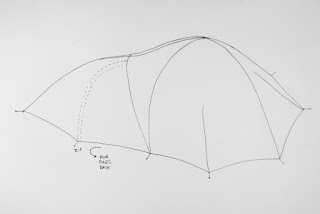 adopting the myth of the fairy knowe as a chamber I worked with Andrew Sleigh to designs a tent in the form of Cnoc Chadail, for keeping dry overnight, and encouraging visions.


These fairies are the equivalent of Ossianic make-believe follies popular among lairds and tourists, and today’s Solstice tripper. Where an English folly tended towards the cave its Scottish cousin opened onto a fantastic view. Wherever dukes or lairds had the income and inclination a folly sprang up, the Land Art of their day, and another of our Cairngorm crazes, with ingenious apparatus to distort vision and hearing by means of coloured glass windows, mirrors, sliding doors, and waterworks.

The exotic fashion also embraced decorative tea pavilions, bath-houses, ice houses, pump houses, game larders, doocots menageries, temples, fake ‘ruins’ and inscriptions, ‘peep-bo places’, and composed landscapes. Late additions include the octagonal game larder and keeper’s cottage at Corriemulzie, and meteorological Observatory in Braemar constructed on the orders of Prince Albert in 1853, exactly 1111 feet above sea level. Sometimes a human element was added to this ‘shaggy geometry’, such as the fee’d hermit the Duke of Hamilton advertised for: ‘as an ornament for his pleasure grounds’, stipulating that ‘said hermit should have his beard shaved but once a year, and then only partially.’ These were ‘druids’ who had lost their willingness to defend the oak grove with their life. 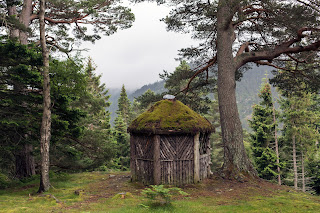 A WHIM OF FASHION : FOLLY
THE FOG OF TIME : MOSS
“RUIN”: RUIN

The Fog House, The Moss Hut

enter a chamber
made for thinking into
and looking out of

On Deeside the Fog House was the most popular kind of folly in the 18th century. The moss – Scots fog – that flourishes on the thatch gave these summerhouses their local name. Supplanting temples to Apollo, Pomona, and Grove’s of Diana, these hermit cells were typically hexagonal, with pitched roofs of heather, reed, or thatch, styled for fans of the Druidical and sited in shady spots that satisfied the melancholia of the age. The fashion returned in the 19th century; the photographs show a fog house in the woods on Craig Leek, and another by Braemar Castle. Adam Watson lists nine in the region, though some are now in ruin: at Balmoral; south-east of the old Mar Lodge, on the east side of the burn at Corriemulzie; near Monaltrie House, in the pass of Ballater; and near Knock Castle, close to Loch Ullachie. A modern replica was made in the gardens of Invercauld House in 2010.

Is the creation of a rustic hut so different from the heroic hunting tales that Gaelic settlers projected onto Glen Shee? Follies may be aristocratic fantasies but they represent a great aesthetic adventure in terms of our perceptions of wild landscapes – one full of potential for reinterpretation – and they are more attuned to their setting than many works of contemporary public art.